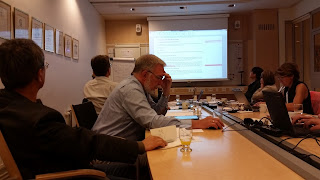 ISO TC6 (paper, board and pulp) is meeting in Stockholm, Sweden this week to review, update and issue International Standards for use throughout the world. There are also some CEN (European Committee on Standardization) meetings being held at the same time.

The US has three representatives at the ISO TC6 meetings. The US attendees this week:
Colleen Walker (TAPPI)
Dave Loebker (Proctor & Gamble)
Todd Popson (Technidyne Corporation) - Head of US Delegation

If anyone is interested in participating in these areas, please contact Todd.
Posted by Unknown at 4:07 AM No comments:

ISO TC6 (paper, board and pulp) is meeting in Stockholm, Sweden this week to review, update and issue International Standards for use throughout the world. The meetings are being held at the Swedish Standards Institute (SIS).

The US has three representatives at the ISO TC6 meetings. We try to cover all of the topics covered. Here are the US attendee this week:
Colleen Walker (TAPPI)
Dave Loebker (Proctor & Gamble)
Todd Popson (Technidyne Corporation) - Chair of US Delegation

Posted by Unknown at 6:05 AM No comments:

The ISO OPAL (Optical Properties Authorized Laboratory) group met at Innventia AB in Stockholm, Sweden August 25 & 26, 2016 in conjunction with the ISO TC6 (pulp, paper and paperboard).  This group is comprised of organizations which have been approved via ISO 4094 to provide optical calibration standards for ISO Standard 2469 conforming instruments.  The group meets in person at least every 18 months to review data and comparisons among each other. Also, procedures, issues and techniques are discussed with the group.  The Chairperson of ISO TC 6 (Technical Committee on paper, pulp and paperboard) WG3 (Working Group on optical properties) leads the discussion.  The group does share readings, data and concerns on an ongoing basis as well.  Current members include:

ISO OPAL Group - What is it? 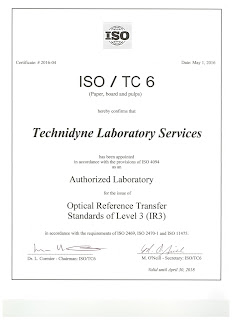 I will be Stockholm, Sweden this week for OPAL (Optical Properties Authorized Laboratory) meetings.  The OPAL is made up of representatives of each of the Authorized Laboratories for producing and distributing IR3 standards for optical measurements according to ISO 2469 for the measurement of ISO 2470, 5631, 11475, 11476, and 22754 (and others).  This group is led by the Chairman of ISO TC6/WG3 (optical properties).  Representatives are from:
In order to maintain a high level of agreement among the labs, they participate in monthly inter-laboratory comparisons. This means the labs produce and ship standards to each of the other labs each month. They read the standards that were received and generate a series of tables showing the monthly comparisons of spectral reflectance (minimally 400-700 nm), fluorescent (UV Level D65 & C) and non-fluorescent levels.. This data is then maintained on a common website for later analysis.  This aids the labs in detecting differences or changes among the group.

In regularly scheduled meetings (like the one in Stockholm), each lab reports and discusses any observed trends, changes or differences. This helps build a cohesive group for issuing standards. The idea is to provide the best agreement among customers that receive standards from any of the Authorized Labs. A new report will be issued by the OPAL in the near future which illustrates the inter-laboratory reproducibility.

Technidyne...for good measure. Visit us at www.technidyne.com
Posted by Unknown at 7:36 AM No comments:

What is TSI Area and how is it used? 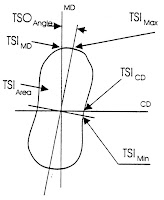 Most are familiar with the "peanut" ellipse the is produced from ultrasonic fiber orientation measurement devices. It is a numerical approximation used to transform the data into a polar diagram.  The area of this polar angle plot is the TSIArea .

With a well adjusted head box, the TSIArea is used to measure the influence of a change in jet-wire speed difference or pressure changes in the head box.

When comparing TSIArea in one running condition to another, a fiber quality index can be used to more easily explain the reason for the change.  Ideally, the operator of the device will enter the TSIArea(target) value based on statistically relevant measurements and the goals of the operation. When the sample is measured, both the TSIArea(measured) and the "fiber quality index" (ratio shown below) are displayed.

Technidyne has been selling fiber orientation measurement devices and helping people with their use of this technology for over 20 years. If you have experience using TSIArea, please share it here.
Posted by Unknown at 7:39 AM No comments: 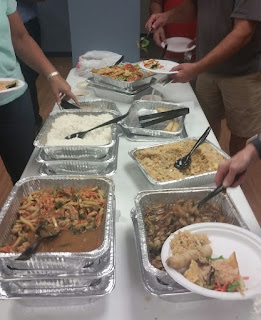 A 10-module, PROFILE/Plus™ test system was shipped to Vina Kraft in Vietnam last week. Today, all team members enjoyed a lunch consisting of Chinese favorites to celebrate (there aren't any Vietnamese restaurants in our area). There were a lot of people involved in the process from securing the order to building and testing instruments and setting up profiles and shipping the equipment. The system will be installed next week.

SCG has been selected by the DJSI (Dow Jones Sustainability Indices) to be world's Industry Leader in Construction Materials for the fifth consecutive year. SCG has retained this prestigious recognition from 2011 and had been on the Gold List for eight years running from 2008 – 2015. Dow Jones Sustainability Indices (DJSI) is a security index that assesses and benchmarks sustainability performance of the world's leading companies and mutual funds from around the world. Those listed in the DJSI are screened for their ability to generate sustainable returns to investors.

Posted by Unknown at 2:08 PM No comments:

The Physics of Fluorescence

What is really happening when something fluoresces? Electromagnetic radiation at one wavelength is absorbed and is then re-emitted at a longer wavelength.  Wavelengths of light correspond to perceived colors (if they fall in the visible range), and this means that shorter wavelength light like ultraviolet or blue is converted to longer wavelength light, like blue, green, yellow, orange or red.


A Jablonski diagram (right) is typically used to illustrate the physics of fluorescence. In the diagram electronic (energy) states are indicated by bold horizontal lines. The thin horizontal lines above them represent vibrational/ rotational sublevels. Electrons are normally at the lowest energy state, indicated by S0. When a photon (indicated by the blue line entering from the left) with appropriate energy interacts with a molecule the photon may be absorbed, causing an electron to jump to one of the levels of an excited state (S1 or S2 in the diagram). By ‘appropriate energy’ we mean an amount corresponding to the energy difference between the ground and excited states. Thus not all incident photons are equally likely to be absorbed. This transition process is very fast, on the order of 10-15 seconds (a millionth of a billionth of a second).

An excited-state electron rapidly (on the order of 10-12 seconds) loses its energy to vibration (heat), a process called internal conversion, and falls to the lowest level of the first (S1) excited state. From there the electron may fall to one of the sub-levels of the ground (S0) state, emitting a photon with energy equivalent to the energy difference of the transition. This happens on a time scale of nanoseconds (10-9 – 10-8 seconds) after the initial photon was absorbed. Since the emitted photon has less energy than the absorbed photon it is at a longer wavelength. This explains the magical process of fluorescence that converts light of one wavelength (color) to another, and leads to the phenomenal display of highly saturated colors in corals and so many other marine organisms.

The probability that a photon will be absorbed varies with wavelength (energy). Even for those photons that are absorbed there are other processes that compete with fluorescence for de-excitation of the excited-state electrons. The number of photons fluoresced relative to the number absorbed is the quantum efficiency. The higher the absorption and quantum efficiency, the brighter the fluorescence.

Principle of Fluorescence1. Energy is absorbed by the atom which becomes excited.2. The electron jumps to a higher energy level.3. Soon, the electron drops back to the ground state, emitting a photon (or a packet of light) - the atom is fluorescing.

Another way to think about this is with the old model of electrons orbiting around the nucleus. In the ground (S0) state the electrons are in the orbital closest to the nucleus. When they absorb the energy of an incoming photon they jump to a higher orbital (S1, S2, etc.) or its sublevels. They can’t jump to the spaces between orbitals, and that is why not all wavelengths of light will make something fluoresce.  The best way to document the fluorescence properties of a particular specimen is to measure excitation and emission spectra.
Posted by Unknown at 7:57 AM No comments:

The smaller the bandpass the better the resolution. Current ISO 2469 conforming instruments are all 10 nm bandpass. However, the new Color Touch™ X has 10 nm, 5 nm and 2 nm bandpass capability.

The terms bandpass and resolution are used to express the capability of a spectrometer to separate spectral bands or lines that are separated by some finite distance.  For an instrument that disperses energy over a prespecified spectral region of the electromagnetic spectrum, the bandpass of a spectrometer is used to describe which portion of the spectrum can actually be isolated by the spectrometer in a "pure" wavelength form.  The spectrometer bandpass is dependent on the dispersion of the grating and the entrance and exit slit width.  An example is often used to illustrate the problem associated with  measuring monochromatic light using conventional spectrometers.  If the ideal spectrometer was used to measure a bright line emission spectrum at a single wavelength (Fig. 8) the spectrum would appear as a single line.  What really occurs when such a spectrum is measured using a conventional spectrometer is a broadband spectrum as shown in Fig 9.  The spectrum assumes a Gaussian-like (or bell-shaped) curve.  This characteristic

broadening of a line spectrum through the spectrometer is an illustration of the spectrometer bandpass.  The actual bandpass for any instrument is assigned a value by determining the FWHM height of the bell-shaped spectrum.  Thus, for the band in Fig. 9, the FWHM could be empirically determined by finding the wavelength at which maximum intensity occurs and measuring the peak height at this position.  This height measurement is divided in half and the bandwidth is measured at this half-height on the band as illustrated in Fig. 10.

To summarize, bandpass and resolution are identical in practice.  Only for the resolution specification of a spectrometer is the expression of bandpass under the specified measuring conditions of an instrument dependent on the slit width settings.
Posted by Unknown at 1:19 PM No comments: